The results of voting at Ferrexpo's Annual General Meeting (“AGM”) and a General Meeting (“GM”) of the Company both held today, 15 June 2022, are set out below.  All Resolutions at the AGM and the GM were voted by way of a poll.

As stated in the Company's AGM Notice and under Listing Rule 9.2.2E, a resolution to elect or re-elect an Independent Director must be passed by both a majority of the independent shareholders and a majority of all shareholders (including the majority shareholder). In order to determine this, votes cast by the independent shareholders were counted separately in respect of the re-election of Graeme Dacomb, Vitalii Lisovenko, Fiona MacAulay, Ann-Christin Andersen and the election of Natalie Polischuk and the results of that separate count are set out below.

All ordinary and special resolutions were passed: 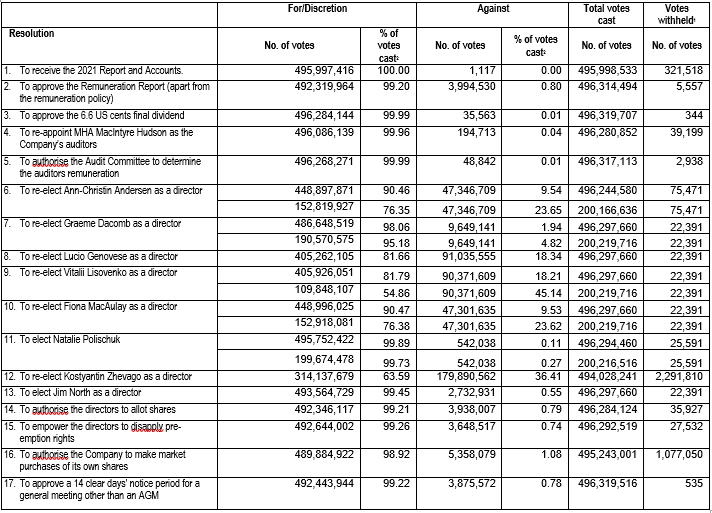 Although all the resolutions were passed, the Board of Ferrexpo notes that there were a significant proportion (more than 20%) of votes cast against resolutions to re-elect four of our directors based on the outcome of either the votes of all shareholders or the votes of independent shareholders.

The Board believes that all these directors bring considerable experience and expertise to the Board. The Board will consult and engage with independent shareholders to better understand the reasons behind these votes and will publish an update of its shareholder engagement within six months of today’s AGM. In particular, the Board understands that certain of these voting outcomes arose due to a shareholder expressing concerns regarding the number of directorships that certain directors hold. The Board is comfortable that each of the directors is able to devote sufficient time to their roles.

The Special Resolution was passed:

In accordance with Listing Rule 9.6.2, Ferrexpo plc has submitted a copy of the resolutions dealing with the special business put to shareholders at the AGM today to the National Storage Mechanism, which will shortly be available for inspection at https://data.fca.org.uk/#/nsm/nationalstoragemechanism.

Link to full PDF version of this release: click here.

Ferrexpo is a Swiss headquartered iron ore company with assets in Ukraine and a premium listing on the London Stock Exchange in the FTSE 250 index (ticker FXPO). The Group produces high grade iron ore pellets, which are a premium product for the global steel industry and enable reduced carbon emissions and increased productivity for steelmakers when the Group’s iron ore pellets are converted into steel, compared to more commonly traded forms of iron ore. Ferrexpo’s operations have been supplying the global steel industry for over 50 years and in 2021 the Group produced 11.2 million tonnes of iron ore pellets, placing Ferrexpo as the world’s 3rd largest exporter of pellets to the global steel industry with a market share of approximately 9%. The Group has a global customer base comprising of premium steel mills around the world, which includes steel mills in Austria, Germany, Japan, South Korea, Taiwan, China, Slovakia, the Czech Republic, Turkey, Vietnam and America. For further information, please visit www.ferrexpo.com.